For over ten years Slaine has been one of the most popular characters in the Galaxy's Greatest Comic, 2000AD. Probably the first 2000AD series ( igorning Blackhawk ) to break the traditional mold of futuristic science fiction, Slaine was the brainchild of Pat Mills. The first episode of Slaine was drawn by Angie Kincaid. Slaine mixed celtic mythology with known lifestyles and people of celtic times.

Map of The Western Europe in Sláine's Time
In the first episode Sláine met Ukko 'The dwarf' and started the epic jounery home to his tribe, and to recover his name after a five year exile, in what is now called Ireland ( The offical name of Republic of Ireland is Eire ), at that time known as Eriu, from Gabala. On this trip he did many great deeds. After encountering the Wickerman, Ice Dragon, BloodThirsty dwarfs, freakish mutants.
Before coming to the eternal fortess, high in the welsh mountain. Then travelling through and space to the Battle of Clonarf 1014 ( A one of the greastest battles in Irish History between the last High King of Ireland and The Vikings ) to ensure the Irish victory endangered by the intervention of the Demon, Elfric. After this he followed Elfric to Cythral. and returning to his own time to do a tour of astral temple in Glastonbury. Finally he returned to his after been exiled from the sessair and become the tribe's king, as they are now down-trodden ( As shown on the shown on the cover 'Slaine the King' ). He goes on to enbrace the ways of the Horned God in order to gain help from the Earth Godess. He becomes united the various Tribes of Earth Godess ( Celts ) after the great battle and the great flood. Sláine and the tribes begin again in Ireland with Sláine as the first High King of Ireland and he began the tradional Seven reign before begin ritually sarficed.

The Triple Goddess - The goddess could constantly change her form sometimes "splitting" into Maiden, Woman and Hag, othertimes Earth,Moon and sea. Three of her famous names were Blodeuwedd(Maiden),Morrigu(Woman) and Ceridwen( Hag ). The three witches or fates in MacBeth are the Triple Goddess.

The Ogham Alphabet - Mysterious, Celtic form of writing used by Ukko, one of the several versions is given below. It was often written in vertical lines or sometimes in hortizontal lines such as seen on gravestones around Ireland. 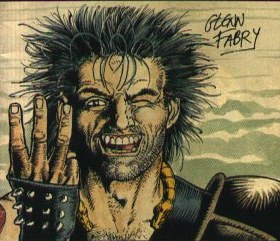 Being Irish myself, I think Mills has igorned some important aspects of celts. Newgrange the oldest buildling in europe built 4500 years ago, it was designed to suddenly light the burial chamber within on the winter solitice. The tales of the red-branch knights, Tír ná óg, the queen meave of connacht and the children of lir survive as myths taught in history in classes to seven-eight years olds in Ireland. The celtic holidays of Samhain, that became the modern Halloween and Febuair, where it regonised that the present day St Brigid represented the 'Goddess of the earth' of Slaine's time.

The celtic tales of the Horned God,although the stories like the character is wandering aimlessily of recent times, have produced many brillant strips.

All Scripted by Pat Mills.

I felt 'King of Hearts' was the low-point for Slaine, a slow decline from the Horned God saga but the series now looks like recovering
Why, oh, why is the William Wallace era the only one that comes up when talkng about the scottish Celts.

New story arc starts involving the Cathars ( The Grail War starts with page introduction to this little known culture to which christian phrase of 'the body and blood of christ' is originated )
New story-arc begins with a 24-page special that takes up the whole of issue 1100, The lost years, promises to return Slaine to his roots

The Sláine epic, which some compared to Cónan, expect that it was building to a climax with flood and disappearance of 'Tir Ná Óg'. (with a couple detours such as 'Time Killer' ). After that, well each story has to judged on own merits.

Go Back to Mai